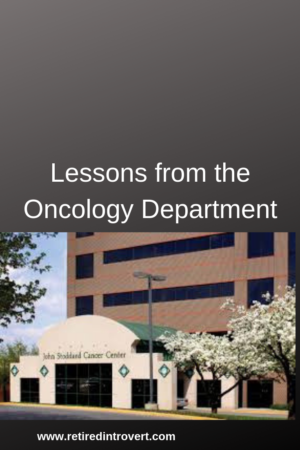 Unlike a lot of you, I (fortunately) haven’t had much experience with cancer. Maybe a little skin cancer that was more nuisance than dangerous, but nothing truly serious. Until a year ago, when my mom was diagnosed with ovarian cancer.

This past year has gone surprisingly fast, at least for me. Maybe not for her. We’ve all been exposed to procedures, protocols, terminology, emergency rooms that we aren’t familiar with. In general, our lives have been pretty sheltered from cancer, so this was a year of new experiences.

I previously wrote about the beginning of the process, in particular about a blood test that isn’t used to diagnose ovarian cancer but can be used to confirm its likely existence. Read this post from last summer.

My mom had three chemo treatments last summer, surgery in mid August, and five more treatments after surgery. She was done with chemo by the end of December.

I was only in the chemotherapy area eight times overall, but it was definitely a learning experience. We spent more time than that in the waiting room of her oncologist.

What did I learn?

Cancer does not discriminate. The people waiting to see the cancer doctors and to get various types of chemo treatments are male, female, old, young, tall, short, skinny, fat, black, white, rich, poor, you name it. No one is safe from cancer.

Not everyone looks, acts or sounds sick. If you didn’t know some of the people there were getting treated for cancer, you wouldn’t think there was anything wrong with them. Some haven’t even lost their hair. I know a lot of people commented to my mom how good she sounded, as if her cancer would make her voice feeble and weak. Appearances can be deceiving.

The oncology nurses are great. Without exception, the nurses who administered the chemo treatments were kind, upbeat, and extremely patient. They shared information and answered numerous questions. They responded immediately the time my mom had a reaction. It takes a special kind of person to be an oncology nurse.

There are a LOT of people waiting like you. Until I experienced the waiting rooms and treatment areas, I had no idea how many people are being treated for cancer. Of course, you don’t know what type of cancer or how serious it is for each person. I only know sometimes there’s no more room in the waiting rooms or it takes a while to get in for treatment because they’re so backed up. Cancer affects a lot of people.

It seems most people tolerate their treatments well. We’ve all heard the horror stories of chemo and maybe some of you have actually had bad experiences. My mom’s treatments always started with steroids, Benadryl and Pepcid to ward off any negative side effects. Other than her one bad reaction, and after they started pumping her full of steroids, she didn’t have problems. I’m not trying to minimize her tiredness afterward but she had no nausea. I also know it can depend on the types of drugs being administered as well as other factors, but most people were able to walk out of chemo with no issues. The patient’s chemotherapy experience has improved over the years.

Cancer patients get better. This was definitely true for my mom. She’s had two scans since the end of December and has been declared to be in remission. Overall, she feels so much better. That’s not to say she doesn’t get tired or face other issues, but her cancer is not there. Cancer is not necessarily a death sentence.

Not everyone gets better. This is the sad part. While some people don’t appear sick, others definitely do. And since all this started, a friend of my mom and dad’s, who we’d see down there, has died. My mom’s doctor didn’t say her cancer was gone; she’s in remission. That’s because it’s likely to come back. It could be in six months or six years. Cancer is not something to take lightly.

What did I miss?

For those of you directly or indirectly affected by cancer, what have you learned that I missed? I sure hope I haven’t trivialized anything about this experience, as that was not my intention.

I have to say this past year has also included a positive side for me. It’s allowed me to spend a good amount of time with my mom and dad. Our chemo days were long and I was glad I could be there to help in any way I could.

I could quickly grab a warm blanket, help my mom manage the IV tubes and get to the bathroom, get my dad a cup of coffee, or walk to the cafeteria and bring back lunch. Jello has become a lunch staple!!

And I always took a sweet treat. 🍪 Sugar makes everything seem better!!

10 thoughts on “Lessons from the Oncology Department”