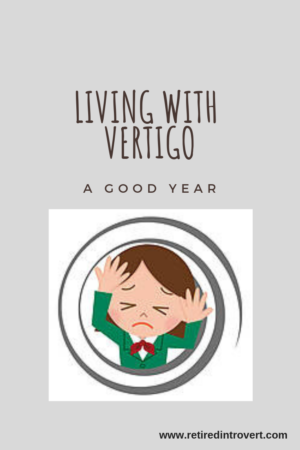 I never thought I was superstitious until I started living with vertigo.

I remember every little thing about my bad episodes and do everything I can not to repeat them. Even what I was wearing, what I had eaten, where I was, which side I was sleeping on. I avoid all of those when I can. (Can’t exactly avoid HyVee, however, and I’ve been there MANY times since my episode there and I’ve been fine. However, I won’t park in the same area.)

Even when I told my doctor in early January that it had been almost a year since I’d had a bad episode, she knocked on wood!!

For those of you who are new followers, you may not have read my previous posts about this. My first post was written over a year ago, right after that last bad episode. Even as I read it now, it’s so fresh in my mind.

After that episode, I wasn’t sure if the medication from Mayo was working but I wasn’t ready to throw in the towel quite yet. It had only been two months and I wasn’t sure if it required some buildup in my system. This post reminded me that I was still feeling somewhat anxious and lacked confidence five weeks later.

Overall, I’ve had a good year. I won’t pretend there haven’t been a few things happen. As I noted in this post, while I didn’t experience a episode, I did have enough of a sensation to create uneasiness, which left me anxious and melancholy.

We cancelled a trip last summer because I’d experienced a “funny” feeling. And after my mom’s surgery and spending four nights at the hospital, I didn’t feel right.

I’ve definitely concluded that stress is a major trigger for me. Prior to each minor spell, I’ve had something stressful going on. Either my mom’s cancer (chemo treatments and surgery), Mickey’s illness, hectic day prepping for Christmas Eve. Things that don’t always feel stressful, but after prolonged exposure, they seem to trigger something in me.

And when I say minor spells, I mean very minor. With these, I can still function. I was even driving once (Tim was with me) and was able to continue. I just couldn’t turn my head or I felt funny.

They are also very short. Sometimes I don’t even need to lay down. And if I do have to lay down, I’m usually up in an hour or so. It doesn’t ruin my entire day like it used to.

I won’t pretend living with vertigo isn’t something I think about daily. I do. But I don’t get anxious and I’ve even had some weeks with multiple appointments that haven’t affected me. This week for example.

I still avoid interstate driving but I will admit I’ve driven a few times on the freeway when I needed to get somewhere faster, or frankly, was tired of the same city streets. I do try to vary my routes because they can get a little boring!!

I found a dermatologist closer to home and get my annual mammograms at a close location. Most of what I need does not require a long trip. I still let Tim take me on longer trips, but sometimes I’ll drive. I’m more confident when he’s with me.

But I do have to say that I’m feeling MUCH more confident these days. There are days when I get ready to leave the house and don’t even think about it. Now that’s progress!!

Last summer, I stopped keeping my daily logs of what I ate, when I exercised, and what I was doing each day. That’s meaningful to me because it says I stopped worrying about it. I have documented my minor episodes, though, as I do still want to identify any patterns, such as the stress trigger.

That one-year mark (January 28) was a significant milestone for me. Up to then, it had only been six months between episodes.

I’m still a little superstitious though. I put off writing this post until after our vacation, because I didn’t want to get cocky and then have something go wrong!! But we’re almost two months past January 28 and I’m feeling great!!

Living with vertigo means knowing it can happen any day. But at this point, my confidence is high enough that I am living each day as if it’s never been a part of my life. After three years of dealing with this, I’m finally feeling I can enjoy my life!!

6 thoughts on “Living with Vertigo – A Good Year”